August 3, 2019 That Geek With The Clip-Ons Film Review, Quick Review Leave a comment 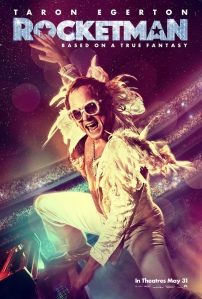 The early life and career of music legend Elton John (Egerton) is explored.

I’ve enjoyed Elton John’s music my entire life, I’m also a fan of actor Taron Egerton (who performed a great cover of Elton’s song “I’m Still Standing” in the 2016 animated musical Sing), and biopics, so this was right up my alley!

The film was a financial success, earning $185.2 million against a $40 million budget. Critically the film has been met with mostly positive reviews, with Egerton’s performance, the costume design and musical numbers receiving general praise.

This movie is fantastic! Egerton is amazing in the lead role, a multi talented actor for sure! The musical numbers are tons of fun and often poignant, and the costumes are so cool! The movie goes for a lot of fantastical elements, but I honestly wouldn’t expect anything else from an Elton John biopic.

Should you see it? You like Elton John? Musicals? Classic music? Then absolutely!