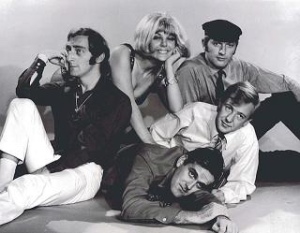 Martin Alan Feldman (July 8, 1934 – December 2, 1982) was a British actor, comedian and comedy writer, known for his prominent, misaligned eyes. He starred in several British television comedy series, including At Last the 1948 Show (with Tim Brooke-Taylor, Graham Chapman, John Cleese, and Aimi MacDonald) and Marty, the latter of which won two BAFTA awards. He also co-created the BBC Radio comedy programme Round the Horne.

Feldman was part of an ensemble cast of British comic actors (including Peter Cook, Dudley Moore, and Spike Milligan) that appeared in Richard Lester‘s The Bed Sitting Room (1969), his film debut. He starred in the comedy Every Home Should Have One (which he also co-wrote), one of the most popular comedies at the British box office in 1970.

He also appeared in The Adventure of Sherlock Holmes’ Smarter Brother (1975), with Wilder (in his directorial debut), Kahn, Dom DeLuise, Roy Kinnear, and Leo McKern; and would reunite with Brooks and DeLuise again in Silent Movie (1976), with Bernadette Peters, and Sid Caesar, with cameos by Anne Bancroft, Liza Minnelli, Burt Reynolds, James Caan, Marcel Marceau, and Paul Newman as themselves.