Nora Ephron (May 19, 1941 – June 26, 2012) was an American journalist, writer, and filmmaker. She is best known for her romantic comedy films and was nominated three times for the Academy Award for Best Writing: for Mike Nichols’ Silkwood (1983), with Meryl Streep, Cher, and Kurt Russell; Rob Reiner‘s When Harry Met Sally… (1989), with Billy Crystal, Meg Ryan, Carrie Fisher, and Bruno Kirby; and Sleepless in Seattle (1993), with Tom Hanks, Ryan, Bill Pullman, Ross Malinger, Rob Reiner, Rosie O’Donnell, Gaby Hoffmann, Victor Garber, and Rita Wilson; the latter she also directed. She won a BAFTA Award for Best Original Screenplay for When Harry Met Sally…. She often co-wrote scripts with her sister Delia Ephron. 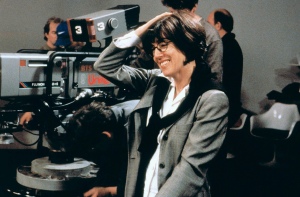 Her first produced play, Imaginary Friends (2002), was honored as one of the ten best plays of the 2002–03 New York theatre season. She also co-authored the Drama Desk Award–winning theatrical production Love, Loss, and What I Wore. In 2013, Ephron received a posthumous Tony Award nomination for Best Play for Lucky Guy. She also wrote various essay books and one novel during her career. She was married 3 times: first writer Dan Greenburg from 1967 to 1976, then to journalist Carl Bernstein (with whom she had two sons Jacob and Max) from 1976 to 1980, and finally to screenwriter Nicholas Pileggi, from 1987 until her death in 2012. The couple lived in the Hollywood Hills in Los Angeles, and in New York City.