Brandon Bruce Lee (February 1, 1965 – March 31, 1993) was an American actor and martial artist. He was the oldest child (and only son) of Bruce Lee (1940 – 1973), who was iconic in the field of martial arts both as a practitioner and leading man in their films. Lee followed his father into both of the fields, trained martial arts with some of his father’s students and studied acting at Emerson College and the Lee Strasberg Theatre and Film Institute. In 1986, Lee made his screen debut opposite David Carradine in the television film Kung Fu: The Movie, where he received second billing and starred in his first leading role in the Hong Kong action film Legacy of Rage (1986), directed by Ronny Yu. 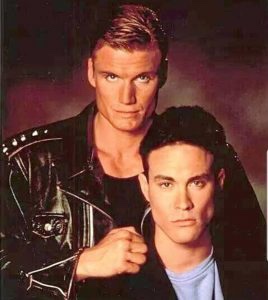 Shortly after, on television, played a lead in the pilot Kung Fu: The Next Generation (1987) and guest-starred in an episode of the television series Ohara (1988). Following this, Lee was the lead in the low budget action film Laser Mission (1989), with Ernest Borgnine and Werner Pochath. In the 1990s, he started working with major Hollywood studios. His first American theatrical release was the Warner Bros buddy cop action film Showdown in Little Tokyo (1991), with Dolph Lundgren, Cary-Hiroyuki Tagawa, and Tia Carrere. It received poor reviews and was described as an overwhelmingly silly action film, but for the same reason some retrospective critics appreciate it. This was followed by a leading role in Rapid Fire (1992), with Powers Boothe, Nick Mancuso, and Kate Hodge; produced by 20th Century Fox. Though the film wasn’t well-received, critics praised Lee’s onscreen presence.

In 1992, he landed his most notable role as Eric Draven in Alex Proyas’s The Crow (1994), with Ernie Hudson, Michael Wincott, Bai Ling, Sofia Shinas, David Patrick Kelly, Michael Massee, and Jon Polito; based on the comic book of the same name, which would be his final film. On March 31, 1993, only a few days away from completing the film, Lee was accidentally killed after being shot on the set by a prop gun. The Crow was completed by re-writing the script, using early CGI technology and stunt doubles. It was generally well reviewed and considered to demonstrate Lee’s dramatic abilities. It was a commercial success and is now considered a cult classic. Many saw parallels between Lee and his father comparing their careers as action film leading men who died young, prior to the release of their breakthrough film. He is buried alongside his father in Seattle’s Lake View Cemetery.