Buscemi has also appeared in a variety TV series including Miami Vice, The Equalizer, Mad About You, Tales from the Crypt,The Adventures of Pete & Pete, The Drew Carey Show, Homicide: Life on the Streets, The Simpsons, and Bob’s Burgers. He directed 4 episodes of the HBO crime drama, The Sopranos (receiving a directing Emmy nomination), and played the cousin of Tony Soprano (Janes Gandolfini) during the show’s 5th season (gaining another Emmy nomination for a supporting role). 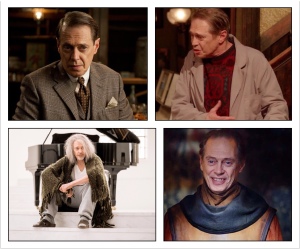 From 2010 to 2014, Buscemi portrayed Enoch “Nucky” Thompson in the critically acclaimed television series Boardwalk Empire (executive produced by Martin Scorsese), which earned him two Screen Actors Guild Awards, a Golden Globe and two nominations for an Emmy Award. For his internet series, Park Bench with Steve Buscemi (where he interviewed a variety of celebrities and regular people on a New York City park bench), he won a Primetime Emmy Award for Outstanding Short Form Variety Series. He also played the role of Pete Wittel in the tragicomedy web series Horace and Pete (2016), created by and co-starring Louis C.K. He’s currently part of the main cast of the sitcom Miracle Workers (season 2 titled Dark Ages), which includes Daniel Radcliffe.