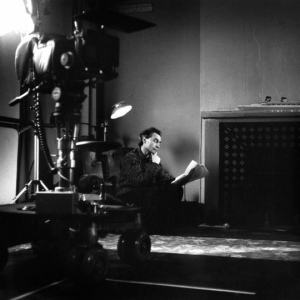 Inspired by Jean Cocteau to become a filmmaker, Rivette shot his first short film at age twenty. He moved to Paris to pursue his career, frequenting Henri Langlois’ Cinémathèque Française and other ciné-clubs; there, he met Truffaut, Godard, Rohmer, Chabrol and other future members of the New Wave. Rivette began writing film criticism, and was hired by André Bazin for Cahiers du Cinéma in 1953. In his criticism, he expressed an admiration for American films – especially those of genre directors such as John Ford, Alfred Hitchcock and Nicholas Ray – and was deeply critical of mainstream French cinema. Rivette’s articles, admired by his peers, were considered the magazine’s best and most aggressive writings, particularly his 1961 article “On Abjection” and his influential series of interviews with film directors co-written with Truffaut. He continued making short films, including Le Coup de Berger, which is often cited as the first New Wave film. Truffaut later credited Rivette with developing the movement.

Although he was the first New Wave director to begin work on a feature film, Paris Belongs to Us was not released until 1961, by which time Chabrol, Truffaut and Godard released their own first features and popularised the movement worldwide. Rivette became editor of Cahiers du Cinéma during the early 1960s and publicly fought French censorship of his second feature film, The Nun (1966). He then re-evaluated his career, developing a unique cinematic style with L’amour fou. Influenced by the political turmoil of May 68, improvisational theatre and an in-depth interview with filmmaker Jean Renoir, Rivette began working with large groups of actors on character development and allowing events to unfold on camera. This technique led to the thirteen-hour Out 1 which, although rarely screened, is considered a Holy Grail of cinephiles. His films of the 1970s, such as Celine and Julie Go Boating, often incorporated fantasy and were better-regarded. After attempting to make four consecutive films, however, Rivette had a nervous breakdown and his career slowed for several years.

During the early 1980s, he began a business partnership with producer Martine Marignac, who produced all his subsequent films. Rivette’s output increased from then on, and his film La Belle Noiseuse received international praise. He retired after completing Around a Small Mountain (2009), and it was revealed three years later that he had Alzheimer’s disease. Very private about his personal life, Rivette was briefly married to photographer and screenwriter Marilù Parolini during the early 1960s and later married Véronique Manniez.