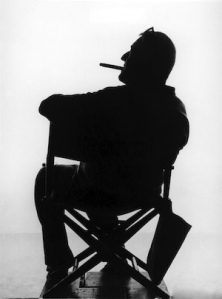 William Castle (born William Schloss Jr.; April 24, 1914 – May 31, 1977) was an American film director, producer, screenwriter, and actor. Orphaned at 11, Castle dropped out of high school at 15 to work in the theater. He came to the attention of Columbia Pictures for his talent for promotion and was hired. He learned the trade of filmmaking and became a director, acquiring a reputation for the ability to churn out competent B-movies quickly and on budget.

He eventually struck out on his own, producing and directing thrillers, which, despite their low budgets, were effectively promoted with gimmicks, a trademark for which he is best known. The first of his movies to use a gimmick was Macabre (1958), in which every customer received a certificate for a $1,000 life insurance policy from Lloyd’s of London in case they should die of fright during the film. He stationed nurses in the lobbies with hearses parked outside the theaters. Among his most famous films were House on Haunted Hill and The Tingler, both released in 1959 and both starring Vincent Price. He was also a producer for Orson Welles‘s The Lady from Shanghai (1947) and Roman Polanski’s Rosemary’s Baby (1968). He also directed Barbara Stanwyck in her last theatrical film, The Night Walker (1964).