Oscar “Budd” Boetticher Jr. (July 29, 1916 – November 29, 2001) was an American film director. He is most famous for a series of low-budget Westerns he made in the late 1950s starring Randolph Scott. His early work in Hollywood included crew work on Of Mice and Men (1939) and A Chump at Oxford (1940). A chance encounter with Rouben Mamoulian landed him a job as technical advisor on Blood and Sand (1941). He stayed on in Hollywood working at Hal Roach Studios doing a variety of jobs.

Boetticher received an offer to work at Columbia Pictures as an assistant director on The More the Merrier (1943). The studio liked his work and he stayed to assist on Submarine Raider (1942), Charles Vidor‘s The Desperadoes (1943), Destroyer (1943), U-Boat Prisoner (1944), and Cover Girl (1944), starring Rita Hayworth and Gene Kelly; promoted to first assistant director. Some of these were Columbia’s most prestigious films and Boetticher was offered the chance to join the studio’s directing program. His first credited film as director was a Boston Blackie film One Mysterious Night (1944). It was followed by other “B” movies: The Missing Juror (1944), Youth on Trial (1945), A Guy, a Gal and a Pal (1945), and Escape in the Fog (1945). 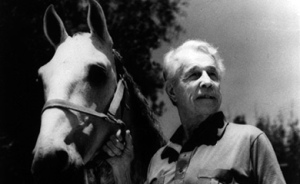 Boetticher got his first big break when he was asked to direct Bullfighter and the Lady for John Wayne‘s production company, Batjac, based loosely on Boetticher’s own adventures studying to be a matador in Mexico. It was the first film he signed as “Budd Boetticher”, rather than his given name, and it earned him an Oscar nomination for Best Original Story. But the film was edited drastically without his consent by John Ford, and his career again seemed on hold. (The film has since been restored by the UCLA Film Archive and the restored print is sometimes referred to by its working title, Torero.)

Boetticher signed a contract to direct for Universal Pictures where he specialised in Westerns. His films there included The Cimarron Kid (1952) with Audie Murphy; Bronco Buster (1952); Red Ball Express (1952), a World War Two film; Horizons West (1952) with Robert Ryan; City Beneath the Sea (1953), a treasure hunting film; Seminole (1953), a Western with Rock Hudson; The Man from the Alamo (1953) with Glenn Ford; Wings of the Hawk (1953) with Van Heflin; and East of Sumatra (1953) with Chandler and Quinn. He started directing The Americano, an independent film with Ford, but quit. 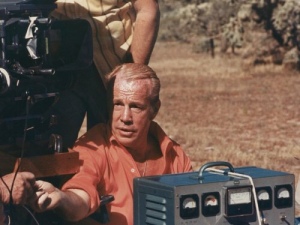 Boetticher finally achieved his major breakthrough when he teamed up with actor Randolph Scott, and screenwriter Burt Kennedy to make Seven Men from Now (1956), with Lee Marvin. It was the first of the seven films (last in 1960) that came to be known as the Ranown Cycle. He was reunited with Scott and Kennedy on The Tall T (1957); they were joined by producer Harry Joe Brown, who would produce the six remaining films. Boetticher directed the first three episodes of the TV series Maverick. He went back to working with Scott: Decision at Sundown (1957); Buchanan Rides Alone (1958) (not written by Kennedy); and Ride Lonesome (1959). Westbound (1959) was made with Scott but without Kennedy or Brown. Comanche Station (1960) was made with Scott and Kennedy.

He directed a sharp gangster film, The Rise and Fall of Legs Diamond (1960), then, with his wife Debra Paget, left for Mexico to film a monumental documentary on famed matador Carlos Arruza. The travail of the next seven years, which Boetticher detailed in his autobiography “When In Disgrace”, included near-fatal illness, divorce, incarceration in jails, hospitals and an insane asylum, and the accidental deaths of Arruza and most of the film crew. The film, Arruza (1972), was both an exquisite documentary and a testament to Boetticher’s immutable drive.

Though he returned to Hollywood to form a partnership with Audie Murphy, they completed only one film together before Murphy’s death in 1971. In later years he was noted for the documentary My Kingdom For… (1985) and his appearance as a judge in Robert Towne’s Tequila Sunrise (1988), with Mel Gibson, Michelle Pfeiffer, Kurt Russell, and Raul Julia; and he was still actively attempting to get his screenplay “A Horse for Mr. Barnum” made, before his death in 2001.