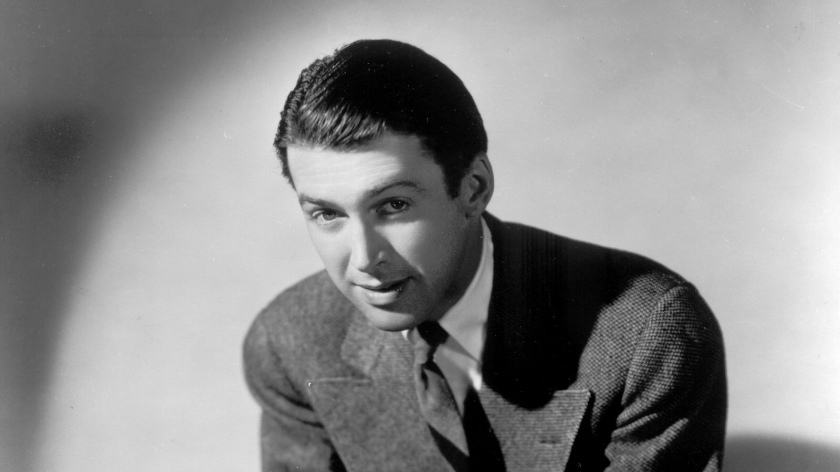 James Maitland Stewart (May 20, 1908 – July 2, 1997) was an American actor and military officer. Known for his distinctive drawl and everyman screen persona, Stewart had a film career that spanned over 55 years and 80 films. With the strong morality he portrayed both on and off the screen, Stewart epitomized the “American ideal” in twentieth-century United States. In 1999, the American Film Institute (AFI) ranked him third on its list of the greatest American male actors.

Born and raised in Indiana, Pennsylvania, Stewart started acting while studying at Princeton University. After graduating in 1932, he began a career as a stage actor, appearing on Broadway and in summer stock productions. In 1935, he signed a film contract with Metro-Goldwyn-Mayer (MGM), making his film debut in The Murder Man, with Spencer Tracy, Virginia Bruce, and Lionel Atwill. Early supporting roles include Wife Versus Secretary (1936), with Clark Gable, Jean Harlow, and Myrna Loy; Small Town Girl (1936), with Janet Gaynor and Robert Taylor; The Gorgeous Hussy (1936), with Joan Crawford; and After the Thin Man (1936), with William Powell and Loy. The studio did not see leading man material in Stewart, but after three years of supporting roles and being loaned out to other studios, he had his big breakthrough in Frank Capra‘s ensemble comedy You Can’t Take It with You (1938). The following year, Stewart garnered his first of five Academy Award nominations for his portrayal of an idealized and virtuous man who becomes a senator in Capra’s Mr. Smith Goes to Washington (1939). He won his only Academy Award for Best Actor for his work in the George Cukor screwball comedy The Philadelphia Story (1940), which also starred Katharine Hepburn and Cary Grant.

Other notable roles include The Last Gangster (1937), with Edward G. Robinson; Of Human Hearts (1938), with Walter Huston and Beulah Bondi; Vivacious Lady (1938), with Ginger Rogers; Made for Each Other (1939), with Carole Lombard and Charles Coburn; It’s a Wonderful World (1939), with Claudette Colbert; George Marshall‘s Destry Rides Again (1939), with Marlene Dietrich; Ernst Lubitsch’s The Shop Around the Corner (1940), with Margaret Sullavan and Frank Morgan; Come Live with Me (1941), with Hedy Lamarr and Ziegfeld Girl (1941), with Judy Garland, Lamarr, Lana Turner, Tony Martin, Jackie Cooper, Eve Arden, and Philip Dorn.

A licensed amateur pilot, Stewart enlisted as a private in the Army Air Corps as soon as he could after the United States entered the Second World War in 1941. Although still an MGM star, his only public and film appearances from 1941 to 1945 were scheduled by the Air Corps. After fighting in the European theater of war, he had attained the rank of colonel and had received several awards for his service. He remained in the U.S. Air Force Reserve and was promoted to brigadier general in 1959. He retired in 1968, and was awarded the United States Air Force Distinguished Service Medal.

After the war, Stewart had difficulties in adapting to changing Hollywood and even thought about ending his acting career. He became a freelancer, and had his first postwar role as George Bailey in Capra’s It’s a Wonderful Life (1946). Although it earned him an Oscar nomination, the film was not a big success at first. It has increased in popularity in the decades since its release, and is considered a Christmas classic and one of Stewart’s most famous performances.

In the 1950s, Stewart experienced a career revival by playing darker, more morally ambiguous characters in Westerns and thrillers. Some of his most important collaborations during this period were with directors Anthony Mann, with whom he made eight films including Winchester ’73 (1950), The Glenn Miller Story (1954) and The Naked Spur (1953), and Alfred Hitchcock, with whom he collaborated on Rope (1948), Rear Window (1954), co-starring Grace Kelly and Raymond Burr; The Man Who Knew Too Much (1956), and Vertigo (1958). Vertigo was ignored by critics at its time of release, but has since been reevaluated and recognized as an American cinematic masterpiece. His other films in the 1950s included the Broadway adaptation Harvey (1950) and the Otto Preminger courtroom drama Anatomy of a Murder (1959), both of which landed him Academy Award nominations. He was one of the most popular film stars of the decade, with most of his films becoming box office successes. 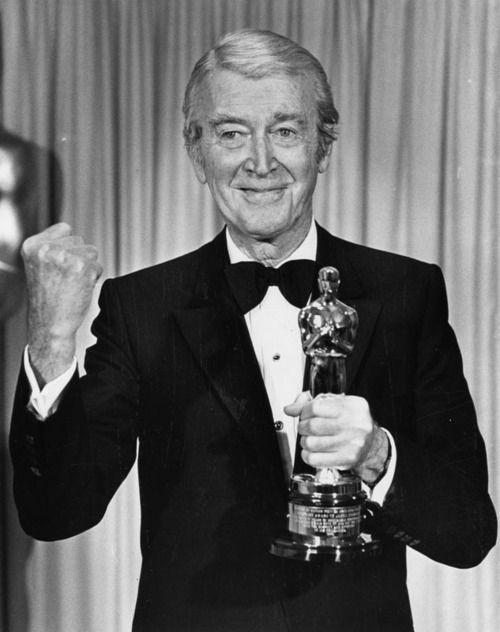 Stewart’s later Westerns included John Ford‘s The Man Who Shot Liberty Valance (1962), with John Wayne, Lee Marvin, and Vera Miles; and Ford’s Cheyenne Autumn (1964), with Richard Widmark, Karl Malden, Sal Mineo, and Edward G. Robinson. He signed a lucrative multi-movie deal with 20th Century-Fox in 1962, and appeared in many popular family comedies during the decade. After a brief venture into television acting, Stewart semi-retired by the 1980s, although he remained a public figure due to the renewed interest in his films with Capra and Hitchcock and his appearances at President Reagan’s White House. He received many honorary awards, including an Academy Honorary Award and the Presidential Medal of Freedom, both in 1985.

Stewart remained unmarried until his 40s, and was dubbed “The Great American Bachelor” by the press. In 1949, he married former model Gloria Hatrick McLean. They had twin daughters, and he adopted her two sons from her previous marriage. The marriage lasted until McLean’s death in 1994; Stewart died of a pulmonary embolism three years later.