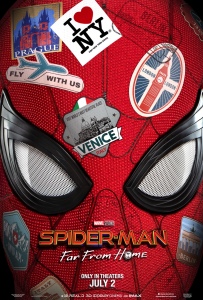 Based on Spider-Man by Stan Lee & Steve Ditko

All Peter Parker (Holland) wants to do is have a regular summer trip around Europe with his friends and take a break from being the friendly neighborhood Spider-Man. But Nick Fury (Jackson) needs his help assisting Quentin Beck aka Mysterio (Gyllenhaal), from stopping a bunch of elemental monsters from another dimension.

It’s another entry in the Marvel Cinematic Universe, of course I’m gonna see it!

The film has been a box office smash, earning over $1 billion against a $160 million budget. It’s also been met with positive reviews for the special effects, humor, and acting (particularly Holland and Gyllenhaal).

Of course I love this movie! Tom Holland once again does a great job in the lead, with the rest of the supporting cast also providing plenty of entertainment. The action is thrilling, the special effects top notch, and some really nice surrealism courtesy of Mysterio.

Should you see it? If you’ve enjoyed the other entries in the MCU, then yes!