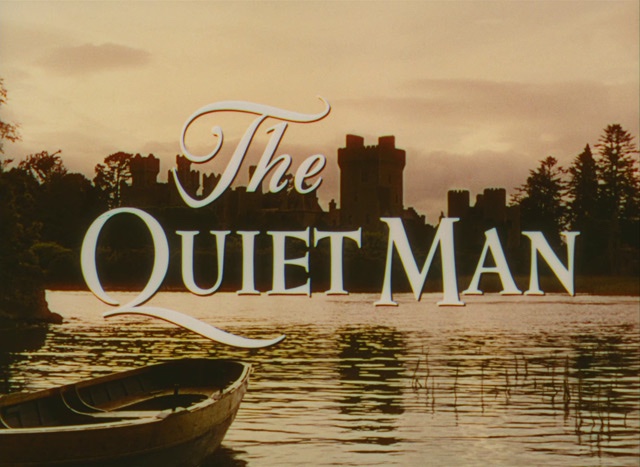 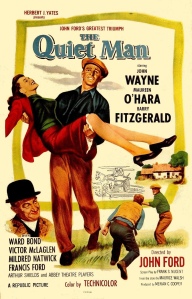 Based on the short story by Maurice Walsh

In the 1920s, Sean Thornton (Wayne), an Irish-born American, returns to his birthplace, the small Irish village of Inisfree, looking to buy his family home. Upon arrival, he has an encounter with fiery redhead, Mary Kate Danaher (O’Hara), and the two have an immediate attraction. Unfortunately, her older brother, Squire “Red” Will Danaher (McLaglen), was interested in Sean’s land too, and isn’t too happy with losing his bid. The law of the time in Ireland means that Sean and Mary Kate can’t marry, or even have a courtship, without her brother’s consent, so this causes tension. What will they do? This movie may be 60+ years old, but I’m not gonna be the one to spoil things!

This was a movie my dad owned first on VHS and eventually DVD, being a big John Wayne fan. It was a movie that was a staple of family vacations when we just felt like staying in. If you’ve seen the Steven Spielberg classic, E.T. the Extra-Terrestrial, then you’ve seen one clip featured and spoofed in that movie.

Random Trivia: Republic Pictures, who financed the film, would only do so if Ford would first direct a western starring Wayne and O’Hara, as they felt this movie wouldn’t be much of a financial hit. They agreed, and made the 1950 film, Rio Grande, which was the first of three films Ford made with Wayne and O’Hara. [Wayne and O’Hara would star in two non Ford directed films together later on. O’Hara was also in two other Ford films without Wayne, who himself was in a total of 24 films made by Ford.]

The film was a financial success, earning $3.8 million against its $1.75 million budget in its first year of release, being one of the top earning films of that year. [Adjusted for inflation today, that’s a box office of over $36 million, not bad!] The film was met with very positive reviews, Ford would go on to win the Academy Award for Best Director (his 4th, he’s the only director to achieve this) and Winton C. Hoch for Best Cinematography, and it was also nominated for Best Sound, Best Art Direction, Best Supporting Actor (McLaglen), Best Adapted Screenplay, and Best Picture. In 2013, the film was selected for preservation in the United States National Film Registry by the Library of Congress as being “culturally, historically, or aesthetically significant.” 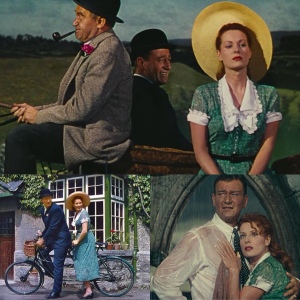 This is a great movie! There’s a reason John Ford has the reputation as one of the greatest filmmakers that ever lived, framing every scene of the film like a vivid painting. Then there’s the star power, pretty much everyone knows the legendary status of John “The Duke” Wayne and Maureen O’Hara, and it’s much deserved. The two had a natural chemistry, you buy O’Hara as a woman who can stand up to Duke, makes you wish they were in more than five films together. The rest of the supporting cast is top notch as well, and there’s a great balance of humor and drama.

O’Hara definitely looks best in color, with that bright red hair and those piercing green eyes (she was nicknamed “The Queen of Technicolor”)! It’s shocking that she was never nominated for an Oscar! Really! Look it up! She would be awarded an Honorary Academy Award in November 2014 at least. She passed away in October of 2015 at the age of 95. I recommend reading her 2004 autobiography, ‘Tis Herself, lots of great behind the scenes stories of the Golden Age of Hollywood.

Should you see it? Yes!