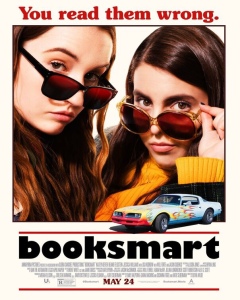 Best friends Molly Davidson (Feldstein) and Amy Antsler (Dever) are high school students who have excelled academically instead of having fun like everyone else. But on the eve of graduation, they discover several of their classmates that they thought were inferior to them are actually getting into decent colleges too, despite doing a lot more partying. So the two decide to cram as much fun into one evening as they can before they graduate.

I’m a fan of teen comedies and nerdy characters attempting to party with ensuing shenanigans, no dip this is up my alley.

The movie was a decent hit at the box office, bringing in $23.1 million against at a $6 million budget. Critically it’s received mostly positive reviews as well, particularly for the acting.

This movie is hilarious! Feldstein and Dever have great chemistry, you buy them as longtime friends. The supporting cast is a lot of fun too, especially Billie Lourd as this crazy, drugged out classmate who seems to be at every party before our main characters somehow. It’s also nice to show teenage girls being as foulmouthed as guys usually are, that wasn’t always as common in movies, and I definitely remember there being girls who could curse up a storm as well as any guy I went to high school with! It plays up some high school stereotypes for sure, but anyone who remembers high school know that some of those do exist.

You like coming-of-age films? You don’t mind adult language? Then abso-fucking-lutley you should!