Alfredo James Pacino (born April 25, 1940) is an American actor and filmmaker. In a career spanning over five decades, he has received many awards and nominations, including an Academy Award, two Tony Awards, and two Primetime Emmy Awards. He is one of the few performers to have received the Triple Crown of Acting. He has also been honored with the AFI Life Achievement Award, the Cecil B. DeMille Award, and the National Medal of Arts.

A method actor and former student of the HB Studio and the Actors Studio, where he was taught by Charlie Laughton and Lee Strasberg, Pacino’s film debut came at the age of 29 with a minor role in Me, Natalie (1969). He gained favorable notice for his first lead role as a heroin addict in The Panic in Needle Park (1971). Wide acclaim and recognition came with his breakthrough role as Michael Corleone in Francis Ford Coppola‘s The Godfather (1972), co-starring Marlon Brando, James Caan, Robert Duvall, John Cazale, Talia Shire, and Diane Keaton; for which he received his first Oscar nomination, and he would reprise the role in the sequels The Godfather Part II (1974) and The Godfather Part III (1990). His portrayal of Michael Corleone is regarded as one of the greatest in film history. 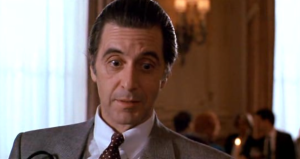 Pacino received nominations for the Academy Award for Best Actor for Serpico (1973), The Godfather Part II, Dog Day Afternoon (1975), and …And Justice for All (1979), ultimately winning it for playing a blind military veteran in Scent of a Woman (1992). He earned Oscar nominations for Best Supporting Actor for his performances in The Godfather, Dick Tracy (1990), with Warren Beatty (who also directed), Madonna, Glenne Headly, and Charlie Korsmo; Glengarry Glen Ross (1992), with Jack Lemmon; and The Irishman (2019), with De Niro, Joe Pesci, and Harvey Keitel, which marked his first collaboration with filmmaker Martin Scorsese.

On television, Pacino has acted in several productions for HBO, including Angels in America (2003), with Meryl Streep, Patrick Wilson, Mary-Louise Parker, Emma Thompson, and Jeffrey Wright; and the Jack Kevorkian biopic You Don’t Know Jack (2010), with John Goodman, Danny Huston, Susan Sarandon, and Brenda Vaccaro; winning a Primetime Emmy Award for Outstanding Lead Actor in a Miniseries or a Movie for each. He also starred with Helen Mirren in the HBO biopic Phil Spector (2012), who were both nominated for Emmy’s and Golden Globes for their performances. Recently he started in the Amazon Prime series Hunters. He has also had an extensive career on stage. He is a two-time Tony Award winner, in 1969 and 1977, for his performances in Does a Tiger Wear a Necktie? and The Basic Training of Pavlo Hummel.

Pacino made his filmmaking debut with Looking for Richard (1996), directing and starring in this documentary about the play Richard III by William Shakespeare; Pacino had played the lead role on stage in 1977. He has also acted as Shylock in 2004 feature film adaptation and 2010 stage production of The Merchant of Venice. Pacino directed and starred in Chinese Coffee (2000), Wilde Salomé (2011), and Salomé (2013). Since 1994, he has been the joint president of the Actors Studio.