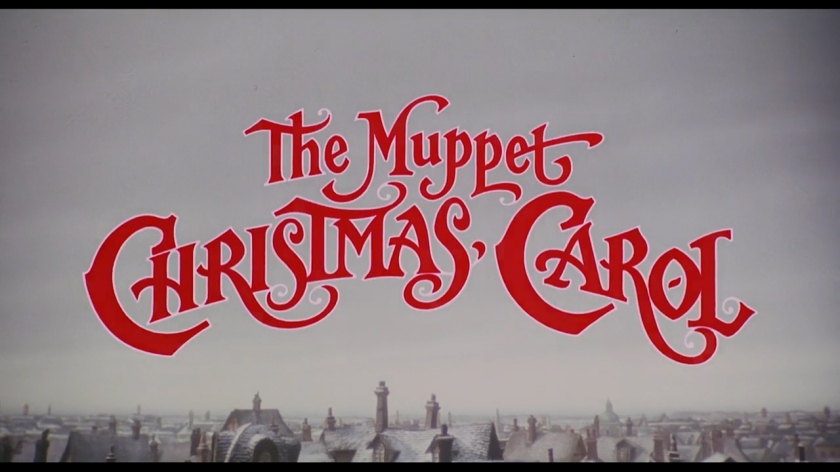 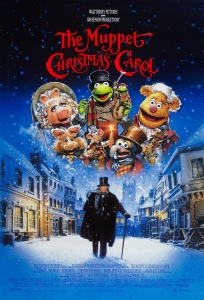 I would imagine most are familiar with the novella “A Christmas Carol” by Charles Dickens. It’s been a staple of English classes for many a year, not to mention it’s been adapted for stage, screen, and television hundreds of times! So I would think I’m not spoiling much. With this being a Muppet movie, it does take a more lighthearted approach to the source material (not really uncommon with many adaptations), with the usual fourth wall humor, slapstick, and jaunty musical numbers. The narrative is told by Gonzo (acting as Dickens), with Rizzo the Rat joining him (and often making wisecracks).

Ebeneezer Scrooge (Caine) is a a cold-hearted, bad-tempered and selfish money-lender, who does not share the merriment of Christmas like everyone else in town. On Christmas Eve, his nephew Fred (Mackintosh), invites him for dinner at his home the next day, only to be rejected like always, dismisses two gentlemen (played by Dr. Bunsen Honeydew and Beaker) collecting money for charity, and tosses a wreath at a carol-singing Bean Bunny. He reluctantly gives his employee Bob Cratchit (Kermit the Frog), and the other bookkeepers (a bunch of rats) Christmas Day off, as Bob points out there will be no business going on and it would just waste money.

When preparing for bed at his home (which used to belong to his deceased partners, Jacob and Robert Marley), he receives a visit from the very spirits of those two men (played by Statler and Waldorf; in the original story there’s just Jacob) who warn him that if doesn’t change his way he will suffer in the afterlife (as they are now), but he still has a chance for redemption. On this night, he will be visited by three more spirits at different times. Just like in the original story, Scrooge is visited by the Ghosts of Christmas Past, Present, and Yet to Come (often called Future in many adaptations).

The Ghost of Christmas Past (with the appearance of a child) shows Scrooge at different phases in his life, from a lonely schoolboy to a young adulthood, including his employment under Fozziwig (Mr. Fezziwig from the original story, played by Fozzie Bear), who owned a rubber chicken factory. He almost married a woman named Belle (Braun), but she left because of his obsession with making money (older Scrooge shows particular remorse over this choice).

The Ghost of Christmas Present (a jolly giant, who starts off youthful then ages) shows Scrooge around town on Christmas Day to show the festivities he’s been missing all these years. This includes a visit to Fred’s house, where his guests don’t understand why he insists on trying to invite his uncle when they all know he’ll refuse. Still, Fred speaks positively of his uncle (as best as he can anyway), and still has hope one day he’ll accept his invitation.

They then go to the home of Bob Cratchit, who’s wife (played by Miss Piggy) is preparing their tiny dinner for themselves and their four children. Their youngest child, Tiny Tim (played by Robin the Frog), walks with the aide of a crutch and has a bad cough, but he still remains positive about the world around him and feels blessed to have a loving family. Scrooge worries about Tim’s condition, to which Christmas Present says it’s very possible that he won’t live to see another Christmas.

Finally, there is the Ghost of Christmas Yet to Come (a tall, cloaked figure who doesn’t speak), who shows Scrooge moments of people dismissing the death of some old man (who’s possessions are being traded around), while the Cratchit’s mourn the loss of Tiny Tim. Scrooge asks who the first dead person is (though his tone comes off as being very much aware), then sees his own grave, and begs for another chance at life.

And you all know the rest. Scrooge awakens in his bed, sees that it’s Christmas morning, gives a large bag of money to Bean Bunny to buy the largest turkey and bring it to the Cratchit house. On the way there he sees Bunsen and Beaker, tells them an unspecified amount of money he’ll give to charity, gives Fred a quick visit, and then goes to Bob’s where he informs him he’ll be giving him a raise and will even pay off the mortgage on his home. The entire neighborhood celebrates with a bountiful feast.

This was the first Muppet film made after the death of Muppets creator Jim Henson (who passed away in May 1990) and performer Richard Hunt (who passed away in January of 1992), with the film being dedicated at the beginning to both of them. It was also the first movie in the franchise to be produced by Walt Disney Pictures, who’s parent company, Walt Disney Studios, acquired the rights to the franchise in 2004. At the time, the film was a moderate box office success, earning $27.2 million against a $12 million budget, as well as receiving mostly positive reviews from critics and audiences.

This was the first Muppet movie I ever saw in theaters, being 5 years old when it came out. Before that I had seen reruns of both The Muppet Show and Muppet Babies all the time on Nickelodeon, so I was already very much a fan. Since my memories of that time aren’t exactly perfect (again, 5 years old), it was possibly the first Muppet movie I ever saw (as well as my first Michael Caine movie).

As you can probably guess by now, I absolutely love this movie! It may not be considered among the best Muppet movies in terms of the humor and musical numbers (which is understandable, since it’s an adaptation), but it has so much heart and Christmas spirit that I don’t really see how anyone can hate it. As usual, there’s great puppeteering going on on, the sets look amazing, and at the very heart of it all is the legendary Michael Caine, who plays Scrooge, who plays it all completely straight, making you almost forget that most of his costars are made of fabric and rods.