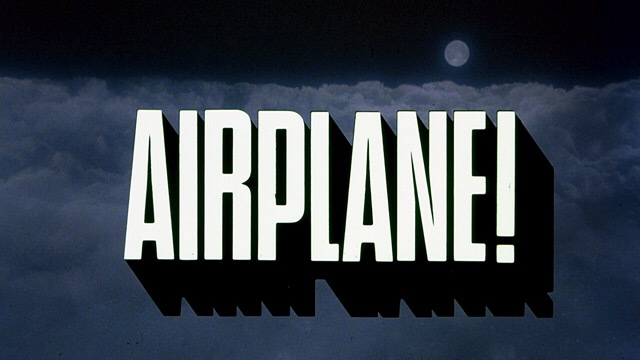 October 12, 2020 That Geek With The Clip-Ons Favorite Films, Film Review Leave a comment

[Possible spoilers ahead, but hey, this is a 40 year old movie! There’s also no way I can cram in every joke, but I’ll put in my personal favorites that I think you’ll enjoy too!]

Ted Striker (Hays) is a former pilot traumatized by flying due to his time in the war. This has strained his relationship with his girlfriend, Elaine Dickinson (Hagerty), a Los Angeles flight attendant for Trans America, who’s heading to her shift for a flight to Chicago. Despite his trauma, Ted is desperate enough to board the plane to try and win Elaine back.

Things take a drastic turn, however, when several passengers develop food poisoning due to some bad fish; this includes Captain Oveur (Graves) and his crew members Victor Basta (Ashmore) and Roger Murdock Abdul-Jabbar). Dr. Rumack (Nielsen), a passenger on board, says the passengers need to get to a hospital as soon as possible. With only the autopilot maintaining trajectory, they need someone to land the plane fast. Ted might be the only hope everyone has.

Meanwhile, the control tower in Chicago, lead by Steve McCroskey (Bridges), is keeping contact with the Elaine and Ted, while also getting assistance from Captain Rex Kramer (Stack), Ted’s former commanding officer turned commercial pilot, to instruct him on landing safely. Fears will be fought, romances will be reignited, and addictions will be re-addicted!

At the time of release, the film was a great critical and commercial success, earning $158 million against a $3.5 million budget. The film’s creators received the Writers Guild of America Award for Best Adapted Comedy, and nominations for the Golden Globe Award for Best Motion Picture – Musical or Comedy and for the BAFTA Award for Best Screenplay. It launched the careers of the younger leads, while rejuvenating the careers of the veteran cast members.

In the years since its release, the film’s reputation has grown substantially. The film was ranked sixth on Bravo’s 100 Funniest Movies. In a 2007 survey by Channel 4 in the United Kingdom, it was judged the second greatest comedy film of all time, after Monty Python’s Life of Brian (1979). In 2008, it was selected by Empire magazine as one of The 500 Greatest Movies of All Time and in 2012 was voted number one in The 50 Funniest Comedies Ever poll. In 2010, the film was selected for preservation in the United States National Film Registry by the Library of Congress as being “culturally, historically, or aesthetically significant.”

Yeah I love this movie, it’s definitely one of my all time favorite comedies! I doubt that’s a big surprise to anyone that knows this movie and it’s reputation, but there’s a reason this has stood the test time, while many other spoof films before and after haven’t (I’m looking at you, Scary Movie franchise and the many many shit films made by the two-headed monster of Jason Friedberg and Aaron Seltzer).

For starters, it has an actual plot. This is something many parody films don’t seem to understand, all they want to do is make (or attempt) jokes or just reference things (complete with shitty impersonators), and that’s not the right approach. Sure, the plot isn’t original, but that’s also the point. It uses a standard plot to then make fun of certain tropes, in this case disaster films that were super popular (and a bit over saturated) at the time the film was made. It’s while the plot is going on that the jokes and sight gags occur.

While I’ve yet to see Zero Hour! (1957), which the major influence on this film (so much so that the producers bought the rights to the script and used a lot of a dialogue word for word), I have seen a few of films in the Airport franchise, which were a series of movies in the 1970s, who’s main connection was they had George Kennedy playing the same character (his appearance time varied in each movie). They would also feature an ensemble of well known actors, and all involved a plane about to crash, with somebody outside the flight crew having to land it (in one it was a stewardess).

One element from the Airport franchise I know was used in this film, specifically a sick girl on the plane and someone playing the guitar to cheer her up. In Airport 1975 the sick child was played by Linda Blair, best known for her role as Regan MacNeil in the horror classic The Exorcist (1973), while in Airplane! the sick child is played by Jill Whelan, who’s best known for playing Vicki, the daughter of Captain Merrill Stubing on the popular sitcom The Love Boat (1977-1987).

Another reason the film holds up, the majority of the cast plays it straight. Every bad spoof film has the entire cast acting goofy and stupid, with little to no subtlety. They seem to forget the importance of the straight man, the person who reacts to the crazy situations around them. Seeing as this is a spoof on disaster films, basically everyone is the straight man, with hammy performances occurring during the melodramatic scenes. That doesn’t mean you can’t have some goofy characters, in fact it can very much help change things up.

The jokes are fast and to the point. I don’t recall any joke overstaying its welcome, once it happens, it’s over and done with and moves along. It’s filled with amusing wordplay, physical gags, visual gags, and so many other things that happen on screen that you probably won’t catch them all the first time around. That’s honestly a good thing, as this is a movie that you’ll wanna watch more than once!

Surely you must see this. And I’ll even stop calling you Shirley if you do!