September 12, 2020 That Geek With The Clip-Ons Film Review, Ian Holm, Worth a Watch Leave a comment

Based on The Death of Napoleon by Simon Leys

[Spoilers ahead, but this movie is almost 20 years old, plus it’s based on some historical facts, so you should already know how some of it ends.]

A revisionist story of how Napoleon Bonaparte (Holm), former Emperor of France now exiled for six years on the isle of St. Helena, plots his return to power. His inner circle has him switch places with a lowly deckhand named Eugene Lenormand (also Holm), while Napoleon will make his way to Paris, at which time Eugene will announce the switch, allowing the real Napoleon to reclaim his throne. [Fun Fact: Ian Holm played Napoleon Bonaparte two other times before: in the miniseries, Napoleon and Love (1974), and Terry Gilliam’s Time Bandits (1981). Stanley Kubrick had also approached him to play the part in the 1970s, when he was trying make a biopic that never came to be.]

Things take a drastic turn almost immediately for the deposed emperor. The ship he’s working on goes to Belgium instead, forcing him to make his way to Paris by land (and forcing him to see the battleground of Waterloo be turned into a tourist trap). He eventually meets Sgt. Bommel (Russell), a former imperial guard turned border guard still loyal to him. Bommell gives him the name of another agent in Paris he can trust, Lt. Truchaut. 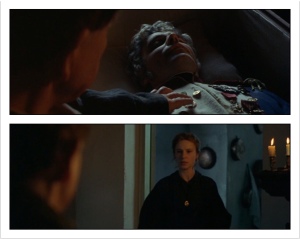 Finally arriving in Paris, Napoleon discovers that Truchaut has recently passed away. Passing himself off as an old comrade of the Lieutenant, Napoleon accepts the hospitality of Truchaut’s widow, Nicole, whom everyone calls “Pumpkin” (Hjejle), and makes the acquaintance of her other lodger, Dr. Lambert (McInnerny) and her adopted young son, Gerard (Watson). 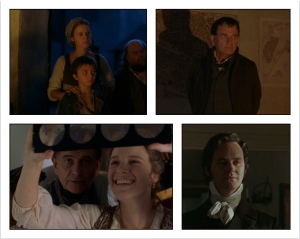 To repay Pumpkin’s generosity, Napoleon (still going by the name Eugene) helps her with her struggling fruit business, using his tactical strategies to help make it prosperous. He and Pumpkin become close and affectionate towards each other, much to the chagrin to Dr. Lambert (McInnerny), who also fancies her. He discovers Napoleon’s true identity, but keeps it a secret. 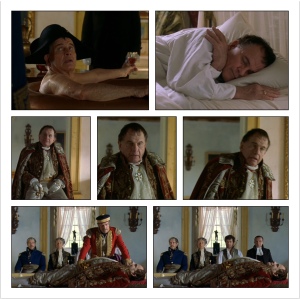 Meanwhile on St. Helena, Eugene has become happy living in relative luxury, and refuses to reveal the switch. Napoleon’s French entourage find themselves unexpectedly powerless, as Eugene stuffs his face with sweets, dictates his own bawdy version of Napoleon’s official memoirs, and even manages to convince his British captors that he is the true Napoleon.

Thus he is the one to die on St. Helena of some sort of stomach distress (in real-life, Napoleon reportedly died of gastric cancer). Realizing that the dead man on the island is not Napoleon, the British garrison commander lays out their options: either they announce the fraud, and face heinous punishment, or else maintain the illusion, and all will be well. And so they all agree to remain silent.

News soon spreads throughout France of “Napoleon’s” death, and the real Napoleon is shaken over the news. He attempts to convince Pumpkin of who he really is, but she refuses to hear any of it. While he at first attempts to prove who he is, eventually Napoleon realizes he’s far happier with his current situation, deciding to live as Eugene and stay with Pumpkin and Gerard. 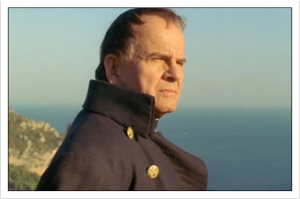 At the time of release, the film received generally positive reviews from critics, particularly towards Holm’s performance, it would win the Audience Award for Best International Feature at the 2002 Florida Film Festival. The author of the source novel wasn’t quite as pleased, as it apparently differs a good bit. I myself haven’t read the book yet, so I can’t compare the differences between the two properties, only by personal opinion.

I really enjoy this movie. I’m a fan of “what if” scenarios involving historical figures, at least when it’s done tastefully (which I think this is). Ian Holm does a terrific job in the duel role of Napoleon and Eugene. My only real complaint would be that I wish there were more scenes of Eugene indulging in being the exiled emperor. Still, what we get is highly enjoyable.

The rest of the cast is made up of solid supporting actors, and Iben Hjejle has a sweet, natural chemistry with Holm. The film looks great too, with moody lighting, terrific costume design, and a great score to round it all out. Some might be turned off that everyone’s speaking English (complete with English accents), and I suppose that’s fair, but I still think this ones worth a watch.