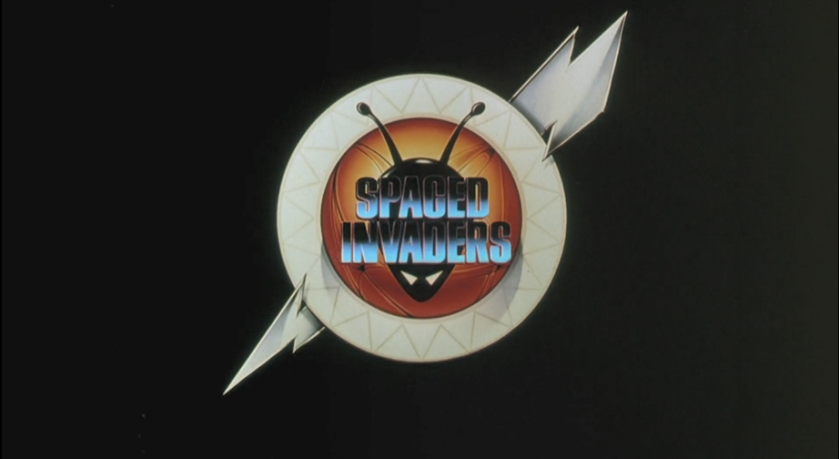 October 31, 2020 That Geek With The Clip-Ons Film Review Leave a comment

History lesson! On Halloween Night 1938, pre legendary (but at this point still pretty famous) actor/writer/director Orson Welles and his Mercury Theatre Group performed a radio adaptation of H.G. Well’s famous sci-fi story, The War of the Worlds. Supposedly, people tuning in late to the broadcast were convinced that Earth really was being invaded by Martians, causing mass hysteria throughout. How widespread the panic really was has been up for debate ever since it happened. I myself have a friend who’s grandma was a little kid when it happened and she hid under her bed in fear (and she remained angry at Welles for many years after). Regardless, it’s an event in pop culture history that’s been mentioned, homaged, and parodied in various media for decades now. This movie is one such example.

In the small town of Big Bean, Illinois, the local radio host decides to play the original War of the Worlds recording, celebrating its 50th anniversary (the movie was made in 1988). Meanwhile, Mars happens to be dealing with an actual war, with one ship picking up a distress signal, followed by the radio broadcast, mistaking it for a real invasion of Earth. This team consists of Captain Bipto, the overzealous optimist of the group; Lieutenant Giggywig, the ambitious, know-it-all hothead; Dr. Ziplock, the careful and calculating scientist; Corporal Pez, who is overeager, yet timid, and Blaznee, the smart-mouthed pilot (and best character in the film, who sounds like Jack Nicholson).

They crash into the farmhouse of the elderly Wrenchmuller (Dano), who’s property is being foreclosed by the greedy Steve W. Klembecker (Berger; who’s better known for voice acting, most notably Grimlock from G1 Transformers!). He immediately sees this as an opportunity to save his land by snapping some photos of the green visitors; he just needs some batteries for the flash (Ah, pre-digital photography!).

Blaznee immediately thinks something is up with the mission, but the others are too excited to start invading to listen. While he stays with the ship, the rest go exploring… and Captain Bipto is immediately hit by a speeding pickup truck! Don’t worry, he’s fine! He ends up at a gas station, where he turns the timid attendant, Vern Pillsbury (Alexander), into an obedient cyborg slave, dubbed Verndroid. The two begin construction of a giant mechanized weapon.

The other three, meanwhile, end up being mistaken for kids in costumes (as it is Halloween), and get sidetracked trick or treating with some other kids. This includes Kathy Hoxly (Richards; probably best known as the granddaughter in Jurassic Park), daughter of the newly appointed sheriff, Sam Hoxly (Barr), who immediately befriends their little robot companion (a Scout-in-a-Can), and figures out immediately they’re not kids in costumes.

Back at the barn, Wrenchmuller tries to capture Blaznee (who’s not falling for a candy bar on a mousetrap). Deputy Russell Pillsbury (Applegate; also brother of Verndroid) shows up to ticket their ship for going 2,945 miles over the posted speed limit of the town’s newly built off-ramp (there’s not much to do in a small town), but gets fouled up by the booby trap.

Blaznee then discovers the signal they got was just a radio show, leading to their on board enforcer drone to seek out and terminate the crew for “failing” the mission. The rest of the crew also figure out real quick that they goofed up, and now try to get back to their ship (which is now at risk of blowing up the entire planet due to engine trouble!) and get off planet as soon as possible.

At the time of release, the film received mixed to negative reception from critics (as I sadly expected). Still, it was financially successful, earning around $15.3 million against $2.25 million (not huge by today’s billion dollar standards, but still nothing to scoff at), and director Patrick Read Johnson would go on to various projects over the years. Also in July of 2020 the distribution company Kino International released a special edition blu-ray, featuring all sorts of special features.

This movie was a HUGE part of my childhood! I watched it all the time on TV (I recall it being on Disney Channel a lot), and when it got a DVD release you bet I got me a copy. Chances are this movie helped get me into cheesy sci-fi and other B movies, and I do mean that in the best possible way. Sure, part of my love for it is nostalgia, but I still think it holds up 30 years later. This was made by people with a great love for the genre, and the cast all seem to be enjoying themselves. The Martians are the best part (as expected), with each having their own distinct look and personality. They all have some really fun banter and tons of memorable one-liners.

There’s also a lot of really nice practical effects and model work going on throughout. Most of the effects were done in camera (meaning they weren’t added in after filming), and a lot of the shots looks impressive considering the low budget. It all moves at a brisk pace, so it never feels like it’s overstaying its welcome. So if you like sci-fi and B movies, give this one a watch!