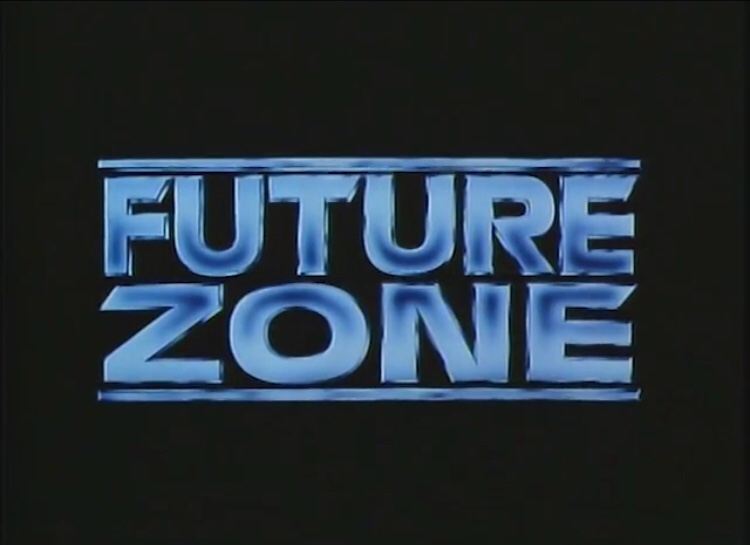 June 30, 2020 That Geek With The Clip-Ons David Carradine, Film Review, It Stinks! One comment

Written & Directed by David A. Prior

[This review will be slightly longer than the previous review, as a bit more happens in it! Not a whole lot more, mind you, but still!]

Hoffman’s goon (who’s name I believe is Dugan, but it doesn’t really matter, I’m just gonna call him Main Goon) disguises himself a fellow C.O.P.S. officer (most likely using his costume from the previous film), to break out the apprehended drug dealer (named Tony Ginetti, but I’m calling him Shazam, for reasons explained below), so that Hoffman can find out if he told Tucker anything about the shipment of drugs. Shazam assures him that he told Tucker nothing, so Hoffman plays some Russian roulette, pointing a six shooter at him with one bullet in the cylinder to help motivate him to tell the truth. Shazam repeats over and over that he told Tucker nothing (which as far as I know, he didn’t), and Hoffman finally says he believes him, but still kills Shazam (remember, bad guy!). 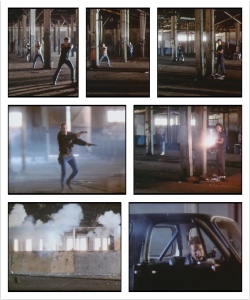 Tucker shows up at the warehouse (sans his robotic lazer glove of course!), where apparently he was expected and a massive shoot out ensues! Nobody is able to hit Tucker despite there being around a dozen guys with uzis and shotguns, and all he has is a six shooter! He also manages to take cover in some shed like thing that’s inside he warehouse (for reasons!). Billy shows up in the Tuckermobile to help take out some of the dealers, and none of them are able to penetrate the car with their bullets (future!).

Tucker asks Billy how he knew where to find him, to which Billy just fumbles all over his words. Lucky for him, two of The dealers are in hot pursuit! A (kinda) fast chase ensues, with cars shooting at each other, nothing really getting accomplished (so on par with everything else in the film), besides Marion calling in to complain that Tucker ditched her. Eventually Tucker and Billy get out of the Tuckermobile and take care of the dealers thanks to a combination of shooting skill and lazy writing (mostly the latter). It also helps that for some insane reason it takes the dealers so long to actually get closer to them despite being in fucking cars!

Tucker tries to call Marion back, but she’s not answering, to which Billy points out that women always get emotional when pregnant (see what I mean about women being poorly represented in these?), which shocks Tucker. Billy then realizes he didn’t know that information yet (brains don’t run in the family clearly). So Tucker drives Billy to an alley and proceeds to punch him, wanting to know how he knows all this stuff about him. After a laborious scuffle between the two, Billy finally confesses that he’s from the future (but not that he’s Tucker’s son, then again it should be obvious!), that he had friends who managed to build a time portal (as you do!), they needed a test subject and he volunteered. Tucker also hasn’t figured out that Billy is clearly there to prevent Tucker from a premature death (that isn’t related to alcoholism).

Hours later, Tucker and Billy are driving when they get a call on the future phone from Cindi. Apparently someone hacked her computers and that’s how that ambush was set up. He then thinks to actually go home and check on his wife, only for his house to blow up right in front of him and Billy (I’m sensing a theme here). Billy freaks out, because he saw the house in his time before he went back to Tucker’s time (and he STILL can’t figure it out!), but obviously Marion must be alive seeing as Billy still exists. Instead of Tucker going to look to see if Marion is alive, he announces that he’s going to get drunk alone (which implies that he’s been sober at all this whole time, which I call bullshit on!). 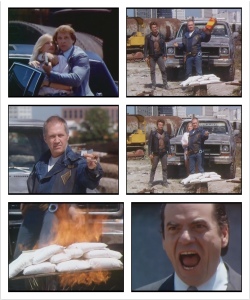 After a bit of back and forth with Hoffman, they threaten to set the drugs on fire if he don’t hand Marion over (never mind that Hoffman has a few snipers set up in the area, with nothing hampering their shot!), he hands her over and OF COURSE Tucker lights the drugs on fire, leading to a so-so gun fight. What’s more impressive is how Tucker and Billy have better aim than the fucking snipers! Maybe that’s why he doesn’t need to use the glove often! No wait it’s because the movie is cheap!

Tucker shoots Hoffman (I bet he’s dead for sure!), then Main Goon prepares to shoot Tucker when Billy jumps in the way, getting shot in the shoulder. All seems lost, until Marion shoots main goon! Tucker then comes to the conclusion that he was supposed to die today, which is why Billy traveled back in time.

And it’s here that a major plot hole occurs. Before the big shootout, Billy says he never knew his dad (Tucker), but when Tucker first meets Billy, he asks him where he learned to shoot; the implication throughout the movie is that Tucker taught him how to shoot. But the whole point of Billy’s mission is that he’s there to prevent Tucker from dying, meaning that he died before Billy was born. So who the hell taught him how to shoot? 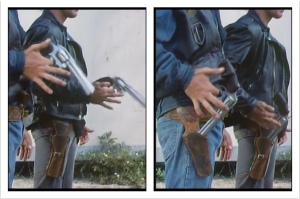 Ok, so Marion shot and killed Main Goon (and that’s the only time in either film that we’ve seen this character use a gun!) so maybe she decided to become a badass gunslinger herself in the alternate future where Tucker died and she taught Billy how to shoot. But again, the implication has been Tucker taught him, they even do the same twirly thing with their guns! 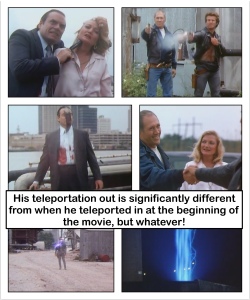 Anyway! Hoffman isn’t dead (shocking I know!), and he holds Marion at gunpoint (where’s the gun she had earlier!? GOD!), but decides to let her go when Tucker and Billy offer to let him live. Naturally they still shoot him! Billy then says he’s gotta go, Tucker asks if he’ll ever see him again, to which Billy says in about nine months (haha), and Tucker FINALLY gets it! Marion however doesn’t get it, even after seeing Billy teleport away! The film fades out on Tucker about to tell Marion their house blew up (HAHA!).

This like Future Force I discovered thanks to the good folks at RiffTrax (and there’s a great review by RedLetterMedia on their show Best of the Worst), and it too is among my favorites. It is slightly better than the previous film, which isn’t saying much! It doesn’t have nearly as many endless driving scenes or guys pouring a drink in real time and taking two espy drinks (the bar has been set low!). Carradine isn’t quite as drunk and miserable looking as he did in the first movie, but he definitely tossed back some (not that I blame him). Ted Prior is slightly better in this than other stuff I’ve seen him in, might help that he’s not trying to act kind a stereotypical 80s tough guy.

The cast is once again a mixed bag, from you should not be in movies (Main Goon), to over the top sleazy (Hoffman). Though there’s even less use of the laser glove, so I’m not sure how much less this movie’s budget was compared to the first.

Does it stink? You bet! Worth watching? Preferably with the RiffTrax version, but like I said before it has better pacing than the first, and while it’s a sequel it hardly matters if you see the first one.