Jimmy Woods (Edwards) is a young boy suffering from PTSD after witnessing the death of his twin sister, Jennifer, two years ago. On multiple occasions he tries to walk from Utah to California for unknown reasons (for those who may not be aware, that’s a nearly 7 hour journey by car based on his location), causing a lot of stress for his mother, Christine (Phillips) and her new husband, Bateman (McMurray), who decide to put Jimmy in a mental institution.

Meanwhile, his older half brothers Corey (Savage) and Nick (Slater), live with their father, Sam (Bridges), and their home life is anything but ideal. Frustrated with the constant arguing of Nick and his dad, Corey decides to run off to California, breaking Jimmy out of the institution on his way. [It was apparently very easy back then for a kid to just walk into a special needs home and sneak someone out with you! Top notch security right there!] Sam and Nick attempt to track them down, while Christine has hired Mr. Putnam, (Seltzer) who specializes in tracking down runaway kids. 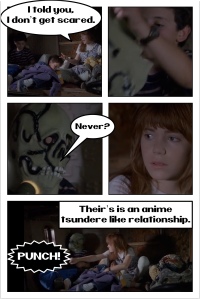 During their trip, Jimmy and Corey team up with fellow runaway kid, Haley Brooks (Lewis), who’s trying to get back to her hometown of Reno. The two discover that Jimmy has a natural talent for playing video games (specifically Nintendo of course) and decide to use his talents to earn money playing other video game enthusiasts. [Some of their competition includes middle aged businessmen? I was 2 years old when this movie came out, so for all I know old guys were playing NES games back then as much as they are now. HEYO!]

Haley also suggests that they travel to Los Angeles and have Jimmy compete in Video Armageddon (being held at Universal Studios Hollywood), which has a grand prize of $50,000! Corey figures if Jimmy wins it’ll prove he doesn’t need to live in an institution, and maybe it’ll even help mend the family some. 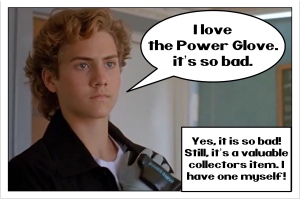 During their journey, they encounter Lucas Barton (Jackey Vinson), said to be the ultimate gamer! So awesome is he that not only does he owns all 97 NES games (there were actually way more out at this time, but for a kid to meet another kid back then with that many games would be intimidating!) he possesses the might Power Glove! With it he is able to play games like no other mortal on the face of the earth! Naturally, he will also be competing in Video Armageddon.

We also follow Sam and Nick who are on Corey and Jimmy’s trail, along with the super rude Putnam! Being rude is basically the main reason to dislike him, that and he looks like a creeper. This slimy little man is not above sabotaging Sam’s ride (a beat up old pickup truck with a tree in the bed, the ultimate dad mobile!), but Sam gleefully fights back with some good old fashioned shovel whacking (even throwing it like a javelin at one point!). Having a couple flat tires means he and Nick need to stay the night while they get new ones.

During the motel night stay, Nick attempts to bond with his dad, only to give up and fetch the NES system from their truck (not sure why it’s there. I mean I know for product placement purposes why it’s there! But I’m talking narrative purposes) and starts playing some Teenage Mutant Ninja Turtles! Sam scoffs at his son playing such a silly game, that is until he’s drawn to the power the little black and grey machine possesses on the human soul!

We get a montage (it’s a film made in the 1980’s, it was basically a law to have at least 1 montage that has a main character improving their skills while an upbeat pop song plays in the background!) of the kids hanging at hotel in Reno, where Jimmy plays a plethora of arcade games, while Haley makes numerous calls to the Nintendo Power Line to get tips on how to beat certain games. Putnam finds them and attempts to take Jimmy back to his mom, but Haley manages to get him off their back by accusing him of molestation (for real!). 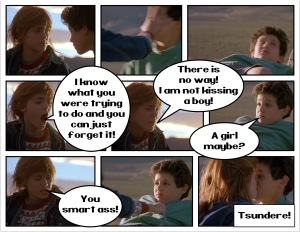 They stop by Haley’s home (which is a rundown trailer due to her mother ditching her and her dad and leaving them in debt) where she and Corey bond some more. Turns out she wants half the prize money help get a better home for her and her dad. Putnam finds them again and snags Jimmy again! Thankfully, Haley has trucker friends who don’t take kindly to creepers.

Eventually they make it to Video Armageddon at Universal Studios Hollywood, where the competition is underway (with Lucas there of course!). The guy announcing the competition is a super intense dude (probably high on cocaine! It is 1989!), who doesn’t so much chew the scenery as devour it! Jimmy gets a late start, but is able to gather up enough points to be among the finalists (along with Lucas and a girl named Mora). [It’s actually surprising to see a girl as one of the finalists in a video game competition in a movie from 1989! I’m certainly not complaining, it’s just not something you expect to see!] It’s also announced that a brand new, never before game will be what the finalists are playing. 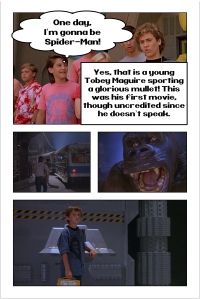 Nick and Sam make it to the park (they encountered Lucas earlier who told them about the competition), along with Putnam and Jimmy’s mom stepdad (not sure who told them, maybe Putnam). Lucas, wanting less competition, shouts out to Putnam when he sees Jimmy and a chase ensues! This includes our trio getting on a tour bus and going into the King Kong Ride (a ride I’ve been on twice at the Florida Park), and seemingly unable to make it to the final round! Oh no! But thankfully, Jimmy does make it (even gets a grand entrance!) and is able to compete.

What game will they be playing? SUPER MARIO BROS. 3! [This was in the fact the first time US audiences were getting to see the game, which would be released February 12, 1990 and become of the best selling video games of all time!] Everyone important to the plot shows up to see Jimmy compete and get super excited the intensity of it all (even the child tracker!). Spoiler Alert (can you really spoil a 30 year old movie?): Jimmy wins Video Armageddon! 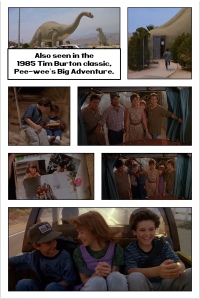 On the way home, Jimmy spots the Cabazon Dinosaurs and gets his family to stop. They follow him inside, and Corey finds Jimmy looking at his photos of the family, one of which was taken their a few years ago. They realize that Jimmy just wanted to leave his sister’s mementos in a place where she was happy. The movie ends with Jimmy, Haley, and Corey in the back of Sam’s truck, smiling and laughing as they drive off into the sunset. 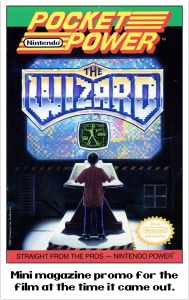 Upon release the film was a met with negative reviews, with much of the criticism aimed at the film feeling like an extended commercial for Nintendo games mixed awkwardly with family drama. [It also has comparisons to the 1988 film, Rain Man. Road movie with a character using a mentally challenged sibling to earn money, it’s hard not to see the similarities. Though I think they’re superficial comparisons.] Still, it was a minor success, earning around $14.3 million against a $6 million budget. Over the years it’s developed a cult following, particularly among gamers and fans of 1980s cinema, there have even been tournaments based around the film held around the country (which have been attended by the lead actors).

This is a movie I grew up watching on a regular basis on TV. I kind of forgot about it when I reached my 20s, but then got reintroduced to it thanks to various internet reviews and a top notch RiffTrax. The complaints towards it are certainly justified, it’s most certainly a giant commercial to sell Nintendo games. But at the same time, I can’t help but really enjoy this movie! It’s clear the director was also trying to make a heartfelt story (that just so happened to feature some blatant product placement), and I think he mostly succeeded. It tackles some tough subjects: divorce, childhood trauma, coping, etc, and handles them well considering the target audience.

The main strength lies in the performances our three adolescent actors. Fred Savage and Jenny Lewis have terrific chemistry with each other, and while Luke Edwards isn’t given much to say, he still has a good presence as our titular Wizard. I don’t recall Beau Bridges ever phoning in a performance, and here it’s no exception; he and Christian Slater have some amusing banter as well.

Is it a great movie? No. But is it worth watching? I think so!