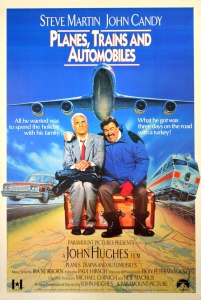 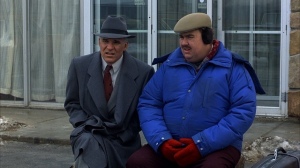 Uptight ad account executive, Neal Page (Martin), is eager to get home to his family in Chicago for Thanksgiving after a business trip in New York. Things don’t go smoothly to say the least, exasperated by several encounters with Del Griffith (Candy), a friendly, but overly enthusiastic/obnoxious shower curtain ring salesman. Their plane gets diverted to Wichita, Kansas due to a heavy snowstorm, from there they do all they can to make it back to Chicago. Given that this is a road trip/buddy film, this means that everything that can go wrong absolutely will! 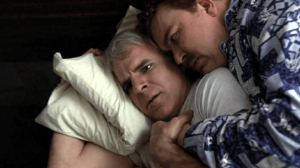 Upon release the film was a minor hit, earning $49.5 million against a $30 million budget. It’s gone on to be seen as both a comedy classic and a staple film around Thanksgiving (which there aren’t really that many that I can think of, plenty they have a scene with Thanksgiving but few where it’s integral to the plot).

I remember coming across this one of the premium cable networks back in 2002 or 2003. At first I was confused as to why it was rated R, until I got to one particular scene that made it very clear. And what a glorious scene it is! You can either look the scene up on YouTube or read look at this comic I made!

You bet I love this movie! It’s a fantastic combo of hilarious and heartfelt (a John Hughes specialty), which is made even better thanks to the lead performances by Martin and Candy. The two have a natural chemistry, it’s really a shame they only ever starred together in one movie (while they both appear in Little Shop of Horrors, Candy’s role is a cameo, he and Martin share no screen time together). 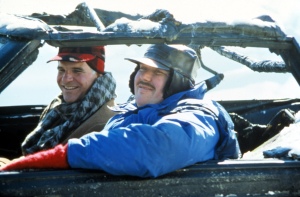 Candy was the kind of actor who I’m sure, if not for his untimely death, would’ve eventually done a role that got him an Oscar nomination. He really was one of those actors who gave it is all in something and was often the most memorable part of any movie he was in. Martin is also a legend for a reason, playing the perfect straight man to Candy’s lovable oaf (though both could play either part with ease).

Should you see it? I’ve gushed enough about this movie, go watch it! Especially if it’s the Thanksgiving season!