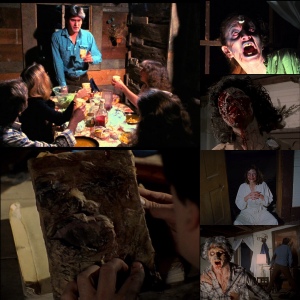 A group of college kids take a trip to a cabin in the secluded woods of Tennessee. They discover in the basement an ancient Sumerian text known as the Naturan Demanto; roughly translated, the Book of the Dead. Playing old recordings left by the previous owner of the cabin, they unwittingly awaken an supernatural force that takes them over one by one, turning them into gruesome creatures that can only be stopped through bodily dismemberment.

Made on a small budget of $350-400,000, the film managed to earn $2.4 million at the box office, probably helped in part to author Stephen King (they did quote him on the poster after all), who’s praise got studios interested in distributing it. It went on to spawn 2 sequels, a tv series, various comic book spinoffs, video games, merchandise, and even an off Broadway musical.

Ok, so any frequent watcher of horror films is familiar with this. It introduced the world to the glory that is Bruce Campbell (though he hadn’t quite reached his peak level of awesome yet, but it was his first movie so it’s understandable), and allowed Sam Raimi to show what he could do on a technical level, even with the limitations he had.

Where a lot of low budget filmmakers would keep the camera static, Raimi takes several opportunities to have the camera move around, particularly when using it to represent the evil presence lurking within the woods. This adds a nice level of eeriness, even when there are some goofy moments (intentional or otherwise).

Of course the biggest appeal is the gratuitous amount of violence! Few films are as satisfying when it comes to the crazy levels of gore strewn throughout, plus there’s the creative ways they implement said violence (you’ll never see a pencil the same way again!).

I had the opportunity to see it on the big screen at a horror movie marathon in 2002, where Bruce Campbell was the guest of honor! At the Q&A I asked which of the three in the Evil Dead Trilogy were his favorite, but he asked me as the fan which was my favorite. At the time Army of Darkness was my favorite of the three (I was 15, my tastes were different), and he went off on a rant, “making fun” of me liking the “studio film” more. Also got him to autograph a copy of his autobiography, If Chins Could Kill, plus a pic with him. I would meet him again in 2014 at a comic book convention, where my best friend and I got a pic with him holding my Book of the Dead Edition DVD!

So yeah, the movie is awesome! If you like horror and graphic violence then give it a watch!