Based on Nightmare of Ecstasy: The Life and Art of Edward D. Wood Jr. by Rudolph Grey 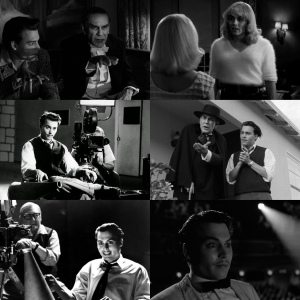 The early filmmaking career of Edward D. Wood Jr. (Depp), often considered to be one of the worst directors of all time, is chronicled. We see the making of his best known films (Glen or Glenda, Bride of the Monster, and his magnum opus Plan 9 from Outer Space), as well as his friendship with horror icon, Bela Lugosi (Landau), who’s in a career slump and addicted to morphine. Despite major setbacks in productions and harsh criticism, even from his own girlfriend, Dolores Fuller (Parker), Ed remains positive and is always excited to get a movie made; his love for angora sweaters also help him get through.

I was around 13 when I first learned of this movie’s existence, finding it on a premium cable network (HBO, Showtime, STARZ, etc.), and I already enjoyed most of Tim Burton’s film at that point. This was my introduction to Ed Wood the filmmaker, I recall there being an interview with Dolores Fuller on the same channel the movie played. It would be a few years later that I saw the three films highlighted within the film, and I can see how they have a cult following (especially Plan 9).

At the time of the release the film was a box office disappointment, bringing in only $5.8 million against an $18 million budget (which is more than any of Wood’s films cost to make combined!). It was well received critically, and went on to win two Academy Awards: Best Supporting Actor for Landau and Best Makeup for Rick Baker, Ve Neill and Yolanda Toussieng. Since then, its developed as big a cult following as any Ed Wood film. 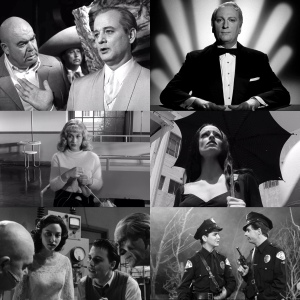 I love this movie! I almost always enjoy movies that are about making movies, plus I enjoy cheesy movies so this film is right up my alley. Johnny Depp is an absolute delight as Wood, Martin Landau is amazing (and foul mouthed) as Lugosi, and the rest of the supporting cast are tons of fun as well. The 1950s period details are great, from the cars to the costumes and sets, it all looks fantastic. The cinematography is gorgeous, black and white really was the only proper way to tell this story.

I’ve learned over time that certain aspects of the film were dramatized (Dolores wasn’t as bitchy as shown in the film, and she left Ed more for his drinking issues than his cross dressing and poor quality of the films he made), but that’s to be expected with most biopics. The intent is what really matters, and that was to make a loving tribute to a filmmaker who still manages to entertain people to this day, even if it’s not in the way he may have planned it.

If you’re a fan of Tim Burton, definitely, also if you love movies about making movies.