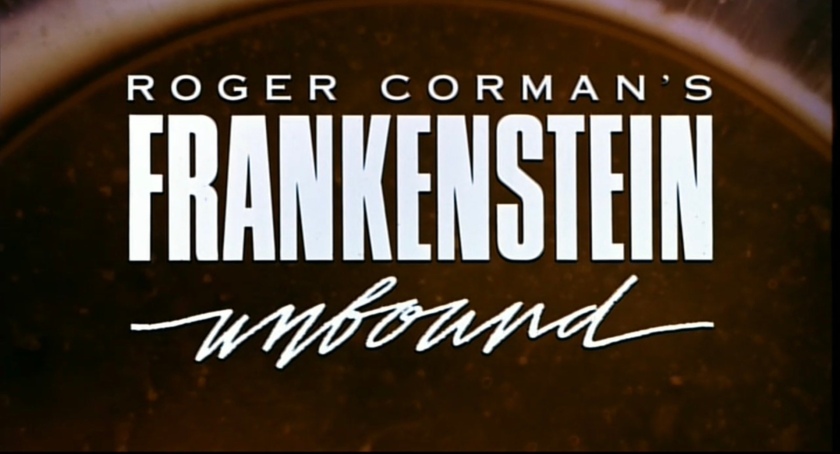 December 29, 2020 That Geek With The Clip-Ons Film Review, Roger Corman, Worth a Watch Leave a comment

Based on the novel by Brian Aldiss

In the not too far off future of 2031, Dr. Joseph Buchanan (Hurt) is developing super weapon, an energy beam that destroys whatever it’s pointed at. With it, he hopes to end wars and help the environment. As with any super weapon of science, it has unforeseen side effects; such creating erratic global weather patterns and rifts in space and time that have caused some people to vanish! Ah, science! Always tampering in God’s domain! This future includes self driving, talking cars that can print stuff out for you. There’s also some questionable fashion choices, which is pretty common in most movies set in the future.

Anyway, Buchanan himself gets transported into one of these time rifts (along with his smart car), ending up in 1817 Switzerland. While there, he has a chance encounter with Dr. Victor Frankenstein (Julia), as well as Mary Wollstonecraft Godwin (Fonda), who will one day marry poet Percy Shelley (Hutchence; who’s best known for being the lead singer of INXS), and publish the eternally popular science fiction novel, Frankenstein; or, The Modern Prometheus. [So we’re dealing with some meta fiction, with Mary being inspired by real life events.] Turns out, Victor has created his creature (Brimble), who’s been roaming the countryside, causing destruction. The creature wants a mate, which Victor isn’t too keen on doing. 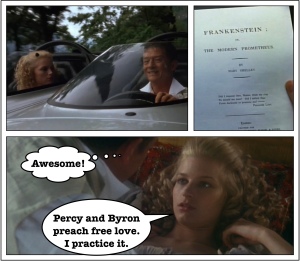 Buchanan himself gets to have a romantic fling with Mary (those who know history will know she and her husband had a very open relationship), after he shows her his super car and that her book will be published and remembered for generations. [Don’t tell me you wouldn’t sleep with an historical figure if you had the chance! I wouldn’t believe you!] Victor then Seeks Buchanan’s assistance in fulfilling the creature’s desire for a mate (after a few more people have died). As you can probably guess this doesn’t go well (does it ever in mad science?), and that’s all I really wanna say about the plot.

A major significance of this film is that it was the first directorial effort of prolific genre producer/filmmaker, Roger Corman, in 19 years (although he had done some uncredited co-directing on a couple films in between). This has been (as of this writing) the last film he’s directed, but he continues to produce. It’s also one of the few films where he was involved in writing the script. With a budget of $11 million, it’s probably the most expensive film he ever directed (as we was well known for making films on super low budgets).

The film was unfortunately a box office bomb, only earning $335,000 against its $11 million budget. Critically, it was met with decent reviews, with praise going towards the acting and makeup effects, and it would be nominated for four Saturn Awards, including Best Director. This was a film I knew of for years, I definitely recall seeing it available for rent at video stores (yes, I’m that old!), and I eventually got myself a copy on DVD. My only real complaint is that it doesn’t come with any special features (not even a trailer), but it does have a booklet with some behind the scenes info, which I always like. I would 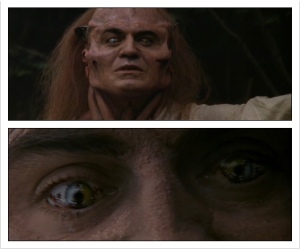 This is a fun movie! Naturally, the strongest performances come from the late greats John Hurt and Raul Julia (they were a huge loss to the world of cinema!), who were both amazing at elevating basically any material. I could listen to Hurt’s smokey voice all day, and Julia could say so much just by widening his eyes (I could also listen to him talk all day). The rest of the cast do a decent job too, given their rather brief screen times. The makeup for the creature I enjoyed, particularly his stitched together eyeballs (not sure how possible that is, especially given the time period, but I’m willing to accept it).

The running time is a brisk 85 minutes, and it is used efficiently! Part of me wishes it were a bit longer, just to flesh things out a bit more, but it still gets the job done as is. The score by Carl Davis is also top notch (Corman has a knack for choosing the right people to score the films he’s producing/directing), and for its low budget, it’s well made, with some very nice production, costumes, and makeup effects (including some effective gory bits!). So if this sounds like a movie you’d watch (and you’re a fan of Roger Corman, or and of the cast), I say go for it!